If you are friends with me, sadly only on Facebook, you’d have noticed my status post which unsurprisingly got a massive number of thumbs-up in less than 24 hours. Out of my 1047 friends and growing, 8 liked it. Let me repeat that again, out of MY 1047 FACEBOOK friends which is equivalent to 8 individuals if you know what I’m talking about, EVERYONE liked it. How amazing is that? Don’t answer that.

The line was a pure genius and a masterpiece nobody has ever invented, or at least none to my knowledge. It is concise but yet full of meaning. It is within the Twitter´s word count limit but is far too worthy to be re-tweeted. Besides that, my Twitter account seems to get hacked somehow. Anyhow, sometimes anything around you can spark the creativity signal transmission within your brain cells. Anything, weather included. 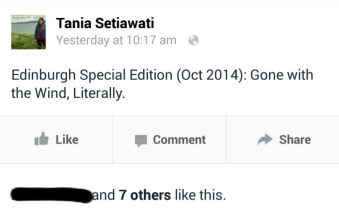 These few days have been terribly windy, the velocity of which I’ve never encountered before. On the street, I could see people scrunching up their face, as if worried that the wind would blow their facial features away. The eerie howling of the breeze, the rustling of crispy and dry autumn leaves, the rhythmic clanging of empty cans and the clinking of empty bottles from the previous late night became the music to my ears.

No amount of physical clothing could protect me from the impending agony. I once considered covering my face with the thick scarf, which I purposely bought for the weather, but thought that my vision would be impaired. Something transparent would work, I pondered, but wrapping my head with a bubble wrap would make me look like an astronaut wannabe and I wouldn’t want that. Don’t laugh it off, though, this could potentially inspire people to land on Mars, mind you.

I was inspired, too, to be a ninja. A half-covered face looks decent but not daring enough to impress. It wouldn’t be of much use either since dusts and whatnot could still intrude my eyeballs. Those with long hair was much worse off. They ended up looking like a medusa-headed creature. Well, actually that was me. The wind not only blew straight on my face, but also brought with it cold and sorrow. When it blew past me, my hair got swept away and so did my courage and enthusiasm to face the day. The warmth and comfort of home was all I craved for, even though my stomach was empty.

The wind has its own timely gestures. It blows along with you, sweeps you off your feet and guides your every step without you being in control. For once, the world is on your side. However, it also blows against your direction and throws at your face the reality of life that everything doesn’t go as you please. How ironic is that? Perhaps I just over-think situations.

Having been just half an hour outdoor already rendered my fingers and toes lifeless, they were as good as frozen nuggets. My head went cold and my brain frozen as if I had just gulped a BIG GULP. The weather had too much more influence on my being than it was supposed to. It was as if the wind was wiping off the dust together with my logic and feelings. Only when my limbs felt numb did I realize my heart felt the same. All I could recall was the memory that joy, regret, excitement and despair were merely a set of feelings to survive through life.

My inspirations to be someone I’m not: an astronaut, a ninja, and a medusa are all gone with the wind.